A historic estate with baroque manor house, well-kept landscape and sculpture park and an ultra-modern farm

At the beginning of the 14th century, the guaranteed history of the Hohen Luckow estate begins when Heinrich von Bassewitz had the church built. Only 500 years later, in 1810, his descendants left Hohen Luckow. From 1840 onwards the von Brocken family lived on the estate. Their most famous representative was Freiherr von Langen, who won Olympic gold in dressage in 1928. This era came to an end with the Second World War. In 1945 the ownership changed and Hohen Luckow became a state-owned estate. From then on the manor house served as an administrative building.

Since 1994 the manor Hohen Luckow is again in private ownership. It was the aim of the renovation to preserve the original character. Even today, agriculture with arable farming and dairy cattle breeding is still practised. The historical buildings serve as stables and workshops. The listed manor house, built in 1707, has been carefully restored as a residential and guest house. The two octagonal side towers, typical additions from the 19th century, give the late baroque building its current appearance.

The manor no accommodations at the moment, but regularly hosts top-class concerts in the beautiful Knights’ Hall.

A unique collection of terrines can be found in the Ulmer Salon of the manor house. Tureens of Écuelles à bouillon, maternity and condiment beer bowls as well as vegetable bowls and lidded tins from the 18th century can be discovered.

In the landscape park, which is open daily, sculptures made of stone, steel and wood can be admired. The stained glass windows of the historic village church were designed and realized by the glass artist Angelika Weingardt. 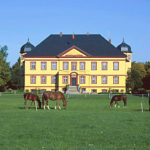 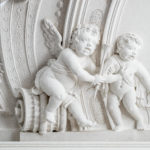 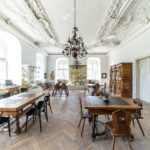 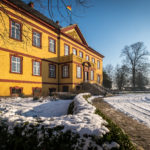