Hotel Klein Strömkendorf is situated in picturesque surroundings between the Hanseatic city of Wismar the Baltic Sea.

In the 17th century, the von Stralendorffs, one of the most famous Mecklenburg aristocratic houses of Mecklenburg, the von Bülows, owned the estate from 1764 to 1789 and were succeeded by the Lange family. Finally, Georg Phillip von Brocken acquired the manor in 1832, but sold it in 1840 to the farmer Ernst Staunau, who had the manor house built between 1841 and 1850. After the 2nd World War the manor house served first as accommodation for more than 40 refugees, but was later subject to the usual dilapidation. After the political turnaround in 1989, the Frankfurt entrepreneur Gerd Milanowski purchased the dilapidated building and renovated it thoroughly.

However, in 2016 he sold it to the Würzburg entrepreneur Thomas Petsch (a+f GmbH Würzburg & MünchMammut GmbH) and his partner, the saxophonist Marita Gronau. Since May 2016 it is now a hotel. For motorbike enthusiasts, the hotel today preserves the heritage of Münch Motorrad GmbH, whose owner was Thomas Petsch. Furthermore, sounds of the saxophone echo through the building regularly and there are events. In the basement is the Mammut-Bar, not only motorcyclists are welcome here.

The house has its own forest behind the house, where the Arschlochwandelweg is created. Your holiday in the manor house Klein Strömkendorf – WELCOME! 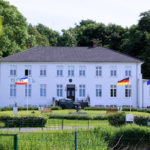