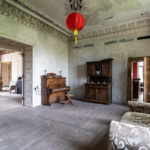 Castle Gamehl is located at the coast near Wismar. It is a secluded location with a small park, easily accessible via motorways. END_OF_DOCUMENT_TOKEN_TO_BE_REPLACED