Welcome to Mecklenburg-Vorpommern – the state of castles, gardens and manor houses. For centuries Mecklenburg and also Pomerania was the “Land of Castles and Manor Houses”.

Since the knights “Heinrich des Löwens” crossed the Elbe in the 12th century and initiated the colonization of the East, large structures have been built here. And so it is the large estates with their manor houses and historic farm buildings, with their patronage churches and the magnificent landscape parks, which have shaped the image of the country for a long time.

Even today, the more than 1000 preserved manor houses bear witness to this past era. Over 300 of them have been restored in recent years and are now used for tourism. These manor houses and stately homes were the living centre of an agricultural estate and a manor village. These manor villages are situated in the middle of a wonderful natural landscape and are ideal for relaxing holidays and nature exploration as well as holidays with culture.

On the following pages you will find some of the most beautiful manor houses of our country, built in the most different styles, which have opened their doors for you as a guest.

The 5-star Schlosshotel Wendorf near Schwerin with its adjoining equestrian sports arena and gourmet restaurant is a jewel for connoisseurs and nature lovers. END_OF_DOCUMENT_TOKEN_TO_BE_REPLACED

A simple manor house, very tastefully renovated in the Mecklenburg Lake District with holiday apartments and bed & breakfast rooms with a café. END_OF_DOCUMENT_TOKEN_TO_BE_REPLACED

A tremendous density of manor houses 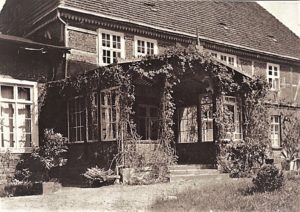 The countryside in eastern North Germany is very extensive, and the agriculture fields are larger then elsewhere. The area beyond the river Elbe is the land of the large agricultural manor estates, which is unique in Europe. After Heinrich The Lion and his battles against the Slavic tribes, a relatively down-to-earth form of Mecklenburg Pomeranian nobility was formed. It’s no coincidence then, that the same family names appear again and again amongst those who received grants of land from the Mecklenburg and Pomeranian Dukes: The Oertzen, Maltzahn, Bülow, Plessen, Hahn, Bassewitz, Blücher, Wedel and Puttkammer families thus became great landowners. After further increase in the land ownership of the nobles due to the 30´s Year War, by the end of the 18th century, the typical, large noble manor estate was established as the dominant feature of the Mecklenburg and Pomerania countryside. Classical farming villages were seldom and had been largely replaced by the manor estate villages. The manor house (Gutshaus, Herrenhaus) was the focal point of the village, the various farm buildings, the dwellings of the estate workers, the church – often a patronage church of the lord, and the typical landscape parks, often rambling over large areas. These building collectives embedded in the wide-ranging Mecklenburg Pomeranian countryside remain to this day the definitive characteristic of the region. The political and social orientation to the East-Elbish manorial structure changed over the course of history. One thing is clear, however, it worked very well for hundreds of years.

Only at the time after 1945 and specially after 1990 the seemingly unstoppable decline of the historically fascinating manorials startet with the separation of the buildings from the land. It still isn’t too late to preserve a large part of this treasure, which offers enormous touristic potential for the region. Nowadays visitors may choose between 1.500 Manor Houses to visit. A few hundred of them are offering a touristic offer. Manor Houses are used as hotels, B&B, Eventlocations or as holiday apartments. Some of them are museums or cultural venues with exhibitions, art or concerts. Some of them offer a luxurious standard, most of them are down to earth and very country house like.

The right manor for your vacation

For your convenience we have clustered the manor hotels into different occasions. So you may browse in the category that meets your needs. Wether it is a family vacation or a family celebration like a wedding or a business event. If you like  a good culinary experience we are happy to recommend these places. You will find manor houses with beautiful nature around or the hotels with classy wellness offers or special offers for wellbeing and activity.

Our hotels in manors and mansions are located in charming villages around the entire state of Mecklenburg-Western Pomerania. By lakes and guarded by avenues, between river Elbe and the river Peene, in the Müritz Lake District  or in Mecklenburg Switzerland. The historic houses with hotel rooms or holiday apartments can also be found in the countryside around Rostock, Wismar or Schwerin. Indulge into this very unique cultural heritage landscape of historic estates.